By the end of June 2021, the Coronavirus pandemic was wreaking havoc throughout the whole world. With the world seeing a threat, people would no longer focus on health issues such as eyesight. Passion and purpose took on a new form, which is why Anton Poplett set out on a special overlanding expedition throughout South Africa. 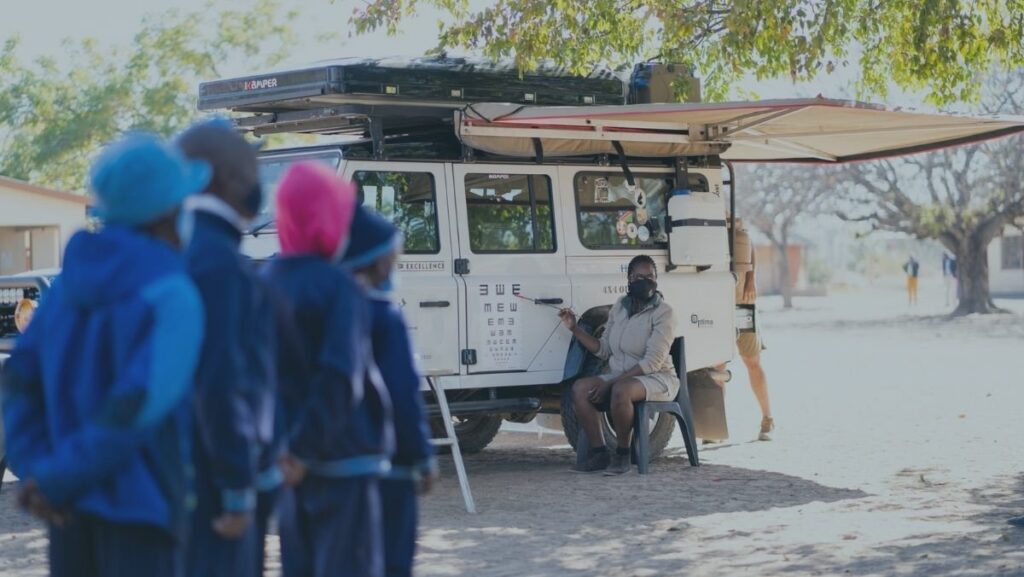 Teaming up with an optometrist (Karl Danneberg), a cameraman (Cam Stuart), his 7-year-old daughter, and his wife, Anton hopped in his Land Rover Defender 110 and stepped into a traveling eye testing expedition. The expedition turned into a lesson for those who want to overland with purpose – with a vision.

It is believed that somewhere around two billion people in the United States have some sort of vision impairment. The issue is that more than half of these problems could have been prevented if people would have caught onto these problems earlier.

The issue is that people in remote regions rarely have access to eye care, whether preventive or corrective. This is why Anton teamed up with Kevin White, a retired U.S. Marine. Together, they put the basis of the Global Vision 2020 kit, which would catch eye problems early on.

The kit starts with a simple eye chart test that follows the eyes. There will be no need for reading or even a common language. It just requires fingers positioned in the right direction: right, left, down, or up. The patterns were applied on the Land Rover, and the tested person had to direct their fingers in a way to resemble the E-like symbol.

If eyesight issues are found, then the tested individual would receive another test to determine their lens. Using a self-diagnostic lens kit, the person would turn a dial and adjust the lens until they can properly see. A color-coded system will afterward be used to find the correct lenses or the eye, placing them within custom eyewear frames.

During this type of overlanding trip, people must expect that roadblocks would be common. Overlanding through South Africa with their eye project and Global Vision kit, Anton expected to see lots of large animals, such as giraffes and elephants.

While Anton went on his eye testing journey, he traveled routes between multiple schools, a particular circuit being between 6 schools in Borbirwa. The area does not have any tourist facilities, so the team had to do their best to protect against natural threats: elephants, lions, and elephants.

Mixed with the bad reception and the bad roads, Anton’s team needed to make sure they had the right camping gear with them. Anton spent around 3 years ensuring they had secure camping quarters. A sturdy vehicle was also necessary – one that would resist going over the rough terrains of South Africa. Vision lights were essential as well, especially since they expected to go through rocky terrains in late hours.

Screening the Children Is Important

The Global Vision kit would test the adults at the school as well, providing glasses where it was needed, but the main focus was to test the children. Most eyesight problems start during childhood, and unless they are corrected in time they can lead to bad eyesight in adults.

The focus was on the screening of children between 10 and 14 years of age. On average, this is a critical stage where eye problems become more noticeable. Many children were quite apprehensive about the eye testing, especially the younger ones who were not familiar with Anton’s team.

This is why they teamed up with the local Children of Wilderness Eco Mentors, which they trained to use the Global Vision kit. These people would be the caregivers or teachers for these children, so the little ones would already have a fair level of trust in them.

They were overlanding through South Africa, not Disneyland. So, they expected a lot of dust and dung while driving through these areas. In order to get to the schools they put on their trail, Anton and his team would have to rely heavily on their 4×4 equipment and skills.

In South Africa, roads are rough and deep – and often not at all pretty. They expected animal roadblocks passing through, such as an elephant passing in front of the car, or two giraffes inconveniently fighting for supremacy in the middle of the road. Aside from road blockage, these circumstances lead to other more inconveniences – i.e., dust and dung.

The secret to making this type of trip a pleasant one was to find joy in places that you would normally not expect. The smell of the bushes, the campfire, the rustling of the trees, or the chance to improve someone’s life – each member of Anton’s crew found something to cling onto.

If you are overlanding, you might as well overland with a purpose. Anton did just that, and while enjoying an overlanding journey in the wilderness, he also helped detect eye problems in communities that had no reach to this type of care.