by adminPosted onAugust 12, 2021
On 08-07-2021, four victims living in Springwood Estates reported their unlocked vehicles were burglarized.
Various items were removed from each vehicle to include cash and personal identification.
Detectives were able to obtain video surveillance showing three individuals wearing masks and gloves committing the burglaries. 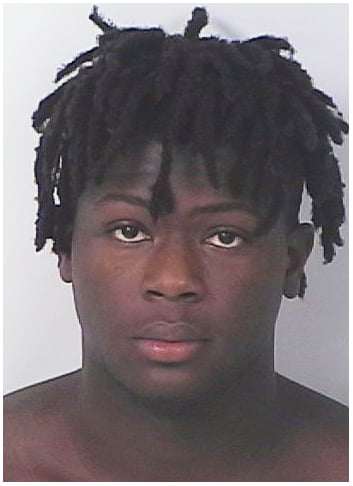 During the course of the investigation, the mother of one of the victims advised she spoke to the mother of a possible suspect in the vehicle burglaries.
The mother of the suspect advised the victim’s mother that she located stolen property belonging to the victim inside of her home on Black Oak Trail.
Deputies responded to the suspect’s mother’s house. The woman advised she believed her stepson Omarion McCullough DOB/08-16-2003, was responsible for the recent vehicle burglaries in the community.
The mother further advised McCullough has a history of committing vehicle burglaries in Hillsborough County. Additionally, she was able to locate a brown leather wallet in her stepson’s trashcan that had information belonging to one of the victims.
McCullough’s stepmother signed a waiver of search for her residence where McCullough was located and arrested. In McCullough’s bedroom, deputies located a large quantity of cash and wallet belonging to one of the victims. They also located clothing worn by one of the three suspects captured on surveillance.
Investigation revealed McCullough entered numerous vehicles to obtain money for his upcoming court date and to pay possible restitution in pending vehicle burglary cases in Hillsborough County.
McCullough advised he did not know the names of the other two individuals who participated in the vehicle burglaries as he had just recently met them at Roger’s Park.
McCullough was charged with four counts of Vehicle Burglary.
He was transported to the Hernando County Detention Center where, after processing, he was transported to a juvenile justice facility in Ocala per the Department of Juvenile Justice.
The investigation remains active with additional charges/arrests possible.
The Office of Sheriff:
The Office of the Sheriff is established by the Florida Constitution. As a constitutional officer, the Sheriff has the exclusive authority to administer his or her agency and is responsible for preserving the peace throughout the entire county, carrying out the laws of the state, the orders of Florida courts, and the ordinances of the Board of County Commissioners. The Sheriff is the chief law enforcement and correctional officer of the county.
Sheriff Al Nienhuis was initially appointed as the Sheriff of Hernando County by the Governor in January of 2011. He was then elected by the people of Hernando County in 2012, ran unopposed in 2016, and was re-elected in 2020. Sheriff Nienhuis remains accountable to the people of Hernando County.
5 / 5 ( 1 vote )