by adminPosted onJune 9, 2021June 9, 2021
On 06-07-2021 at 1:30 p.m., Hernando County Sheriff’s deputies and officers from the Animal Enforcement Unit responded to 9203 Weatherly Road in Brooksville in response to a court ruling Monday by County Judge Kurt Hitzemann regarding a Fitness Petition. 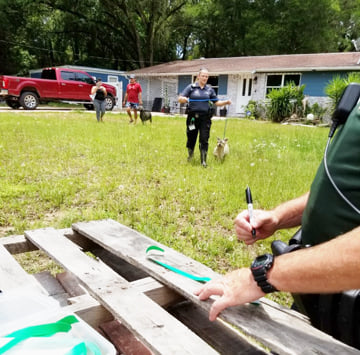 This address is where Jian Karlos Ortiz-Mendez previously operated Golden Kennel LLC.
The ruling terminated Ortiz’s ownership of all of his animals. Furthermore, it forbid Ortiz from owning animals in the state of Florida indefinitely.
The 54 dogs collected on Monday were deemed property of Hernando County. All of the dogs were turned over to Hernando County Animal Services.
Ortiz’s criminal cases remain pending in Circuit Court.
Original information
On 03-02-2021 just after 10 a.m., Hernando County Sheriff’s deputies and animal enforcement officers, accompanied by representatives from Hernando, Pasco, and Hillsborough County animal services, the Florida Department of Agriculture and Consumer Services, and the University of Florida executed an Inspection Warrant at Golden Kennel LLC, located at 9203
Weatherly Road in Brooksville.
Animal Enforcement Officer M. Rowe obtained the Inspection Warrant as part of an ongoing investigation into sick puppies being housed at, and sold from, the kennel. During the investigation, Rowe received information that several puppies had recently been sold from the kennel and within days of being sold, some of the puppies died of Canine parvovirus.*
When Rowe responded to Golden Kennel to investigate, the operator, Jian Karlos Ortiz-Mendez, refused to allow Rowe full access to the puppies. As Rowe spoke to Ortiz in the office, she did observe a very sick puppy on the floor and questioned him about the condition of the puppy. Ortiz told Rowe that his veterinarian “was aware.” Before leaving the property Rowe advised Ortiz that all puppies and adult dogs on the property needed to be seen by the veterinarian and treated accordingly if infected with the virus.
Upon execution of the Inspection Warrant on today’s date, Rowe located 11 dead puppies, improperly disposed of in garbage cans on the property.
Eight puppies were seized from the property and sent to local veterinarians for treatment.
Each of the puppies exhibited signs consistent with Canine parvovirus.
All other dogs (approximately 138) were left on the property under the care of kennel staff. Authorities at Hernando County Animal Services will be revoking Ortiz’s kennel license. No dogs and / or puppies may be sold or removed from this location unless removed under the direct care of a licensed veterinarian.
Deputies arrested Jian Karlos Ortiz-Mendez DOB/12-09-1986, charging him with 11 counts of Aggravated Animal Cruelty and one misdemeanor count of Animal Neglect, stemming from a lack of water to kenneled dogs. His bond was set at $23,000.
*Canine parvovirus
Canine parvovirus is a highly contagious virus that can affect all dogs, but unvaccinated dogs and puppies younger than four months old are the most at risk. Dogs that are ill from canine parvovirus infection are often said to have “parvo.” The virus affects dogs’ gastrointestinal tracts and is spread by direct dog-to-dog contact and contact with contaminated feces (stool), environments, or people. The virus can also contaminate kennel surfaces, food and water bowls, collars and leashes, and the hands and clothing of people who handle infected dogs. It is resistant to heat, cold, humidity, and drying, and can survive in the environment for long periods of time. Even trace amounts of feces from an infected dog may harbor the virus and infect other dogs that come into the infected environment. The virus is readily transmitted from place to place on the hair or feet of dogs or via contaminated cages, shoes, or other objects.
https://www.avma.org/resources-tools/pet-owners/petcare/canine-parvovirus
The Office of Sheriff:
The Office of the Sheriff is established by the Florida Constitution. As a constitutional officer, the Sheriff has the exclusive authority to administer his or her agency and is responsible for preserving the peace throughout the entire county, carrying out the laws of the state, the orders of Florida courts, and the ordinances of the Board of County Commissioners. The Sheriff is the chief law enforcement and correctional officer of the county.
Sheriff Al Nienhuis was initially appointed as the Sheriff of Hernando County by the Governor in January of 2011. He was then elected by the people of Hernando County in 2012, ran unopposed in 2016, and was re-elected in 2020. Sheriff Nienhuis remains accountable to the people of Hernando County.
5 / 5 ( 1 vote )