by adminPosted onAugust 25, 2021
On 08-23-2021 at approximately 2:17 p.m., an operator in the Hernando County Sheriff’s Office Emergency Communications Center answered a 9-1-1 call from a bank employee at the Regions Bank, located at 7165 Mariner Boulevard in Spring Hill. The bank employee was calling to report a Bank Robbery, in progress.
Numerous patrol deputies, district detectives, and various other units were immediately dispatched to the bank.
Arriving within minutes, deputies surrounded the bank to place the suspect under arrest as he exited the building. As deputies took tactical positions outside the bank, they observed the suspect pacing inside the bank.
Meanwhile, the bank employee told the 9-1-1 operator the suspect demanded money, stated there was a bomb outside (in his vehicle) and that he had a firearm.
The suspect, later identified as Michael Nathan Lee Rouisse (aka Natasha Rouisse) then exited the bank. Upon spotting law enforcement officers he fled toward his vehicle, a silver Hyundai, parked in the northeast section of the parking lot. As he ran, he spotted a female sitting in her vehicle, a 2011 black 4-door Chrysler 300, in the parking lot. Rouisse jumped in the passenger seat of the Chrysler. 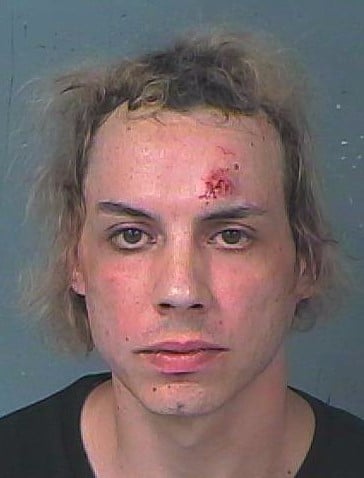 The female driver of the Chrysler, who witnessed the deputies chasing the suspect, immediately jumped out of her vehicle. Rouisse then hopped into the driver’s seat and stole the Chrysler. Rouisse then fled from deputies southbound on Mariner Boulevard.
While travelling south on Mariner Boulevard in the area of Landover Boulevard (at the traffic light), Rouisse struck another vehicle. Rouisse continued southbound, with deputies following.
Finally, in the area of Mariner Boulevard and Norvell Road, deputies were able to get Rouisse stopped.
As deputies approached the vehicle to remove Rouisse, the front end of the Chrysler ran into the rear end of a deputy’s marked patrol vehicle, as Rouisse failed to place the Chrysler into park when he stopped.
Numerous witnesses from the bank positively identified Rouisse as the suspect.
During an interview with detectives, Rouisse confessed to attempting to rob the bank, making the bomb threat, and stealing the vehicle. Rouisse told detectives he just wanted to buy a new car because his was not operating well and he wanted to have some money to change his living situation. Rouisse also stated that he just wants to be a “big rock star.”
The Citrus County Sheriff’s Office provided assistance at the scene by sending their Hazardous Devices Team (bomb squad) to check the vehicle Rouisse arrived in for bombs and/or explosive materials. None were located.
Michael Nathan Lee Rouisse W/M DOB/01-27-1995 (aka Natasha Rouisse) was placed under arrest and transported to the Hernando County Detention Center. Rouisse was charged as follows:
• Attempted Robbery
• False Bomb Threat
• Resisting Arrest w/o Violence
• Grand Theft Auto
• Flee to Elude
• Bond – $17,000.
5 / 5 ( 1 vote )