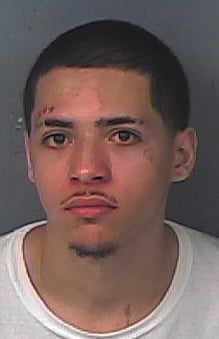 The victim advised she was sitting in the pavilion charging her phone when she decided to walk to a nearby gas station to meet her boyfriend. Shortly after leaving the pavilion, she realized she left her cell phone behind. Upon arriving back at the pavilion, the victim was approached by two males who advised someone took her phone.
The two males refused to say who took the phone and then told her she had five minutes to leave the park. As the victim attempted to leave the park, she advised the two males began to follow her. An argument ensued over whether the two males had taken the victim’s phone. The victim’s boyfriend arrived on scene during the confrontation.
One of the males, later identified Jarid Ramirez DOB/01-03-2002, proceeded to point a handgun at the victim and her boyfriend. The boyfriend proceeded to arm himself with a knife and a set of brass knuckles in his possession. The suspect and his friend left the area as the boyfriend called 911.
Deputies were able to locate the suspect and his friend in the park. Ramirez was found in possession of the victim’s cell phone.
The suspect refused to cooperate with the investigation. The suspect’s friend advised Ramirez did point a gun at the couple, but only after the victim’s boyfriend threatened them with a knife and brass knuckles.
During questioning the boyfriend advised he tossed the knife and brass knuckles after the incident due to him being a convicted felon and not wanting to get in trouble for possessing the weapons.
The K-9 Unit was called to assist in the search for the weapon.
While conducting a search of the area for a firearm, K-9 Argo located a handgun in some nearby bushes. K-9 Argo bit down on the firearm and the handgun discharged while in his mouth. Argo sustained an injury to a tooth during the incident. He was transported to an emergency veterinarian where the tooth was removed. Argo is expected to make a full recovery.
Ramirez was arrested on two counts of Aggravated Assault and one count of Petit Theft.
He was transported to the Hernando County Detention Center where he’s being detained in lieu of an $11,000 bond.
Additional charges against Ramirez and the victim’s boyfriend are pending further investigation.
The Office of Sheriff:
The Office of the Sheriff is established by the Florida Constitution. As a constitutional officer, the Sheriff has the exclusive authority to administer his or her agency and is responsible for preserving the peace throughout the entire county, carrying out the laws of the state, the orders of Florida courts, and the ordinances of the Board of County Commissioners. The Sheriff is the chief law enforcement and correctional officer of the county.
Sheriff Al Nienhuis was initially appointed as the Sheriff of Hernando County by the Governor in January of 2011. He was then elected by the people of Hernando County in 2012, ran unopposed in 2016, and was re-elected in 2020. Sheriff Nienhuis remains accountable to the people of Hernando County.
5 / 5 ( 1 vote )