by Thanh TungPosted onDecember 17, 2022
Search Warrant – Illegal Gambling – Shipwrecked – 2022-34742
Date: December 16, 2022
On 12-15-2022, the Hernando County Sheriff’s Office Vice and Narcotics Unit executed a search warrant at 136 Commercial Way in Spring Hill. The business, “Shipwrecked,” was an illegal gambling “game room.”
An investigation revealed “Shipwrecked” was operating in violation of Florida State Statute, and detectives were able to identify that the business was operating a lottery, which is a felony offense.
Upon execution of the search warrant, two employees, Nicole Menech DOB 09-17-1979 and Kenneth Castrechino DOB 02-07-1979, were each charged with the following offenses:
• Maintaining a Lottery, Florida State Statute 849.09(1)
(felony)
• Keeping a Gambling House, Florida State Statute 849.01
• Play Games of Chance by Lottery, Florida State Statute
849.11
• Possession of a Slot Machine, Florida State Statute 849.15
Menech was found to have violated these offenses on a previous date during an undercover operation as well.
Both were transported to the Hernando County Detention Center where Menech is being held on a $10,000 bond and Castrechino on a $5,000 bond. 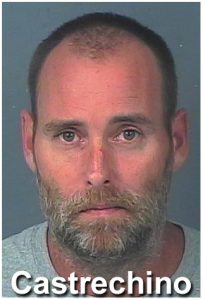 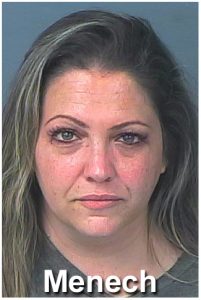 During the execution of the search warrant, detectives seized $15,819 in cash and various gambling machines.
Five (5) patrons were observed on scene and actively gambling. The Hernando County Sheriff’s Office educated the patrons explaining they can also be charged with a crime for participating in these game rooms. Four (4) of the patrons were issued warnings and released on scene.
Additionally, one patron was arrested for the following offenses:
Michael Tippie DOB 11-04-1974 was charged with Possession of Methamphetamine, Possession of Fentanyl, and Possession of Drug Paraphernalia.
Tippie was also placed under arrest for Playing Games of Chance (Florida State Statute 849.11), due to being on scene of a prior search warrant from April 2021 where he was a patron of a gaming establishment and warned of the crime he was committing at the time.
Tippie was transported to the Hernando County Detention Center where he is being held on a $12,000 bond.
While these types of establishments are considered enjoyment by some citizens, they also attract a criminal element to the area. Drug use and sales, weapons disturbances, fights, and robberies are known to occur at these types of establishments.
This creates a safety concern for the patrons and employees of these game rooms, as well as the surrounding businesses and neighborhoods. The Sheriff’Office will continue to investigate other businesses in violation of Florida gambling laws, and we are committed to educating our citizens on the matter.
The Office of Sheriff:
The Office of the Sheriff is established by the Florida Constitution. As a constitutional officer, the Sheriff has the exclusive authority to administer his or her agency and is responsible for preserving the peace throughout the entire county, carrying out the laws of the state, the orders of Florida courts, and the ordinances of the Board of County Commissioners. The Sheriff is the chief law enforcement and correctional officer of the county.
Sheriff Al Nienhuis was initially appointed as the Sheriff of Hernando County by the Governor in January of 2011. He was then elected by the people of Hernando County in 2012, ran unopposed in 2016, and was re-elected in 2020. Sheriff Nienhuis remains accountable to the people of Hernando County.
5 / 5 ( 4 votes )